The Leica SL (Typ 601) was the Big Daddy for me at this year’s PhotoPlus Expo, no doubt. I mean, after that, where do you go? 🙂

The Leica S and SL gallery of images.

Anyway, I know there’s a lot of other “fish in the ocean” so I’ll try to give you guys a rundown of other things I saw. This is Part II and my final show report for this year’s expo, but it is by no means a “complete” report of the show, it would take way too much time to do that and I’m sorry if I left out anything someone might have been interested in. I leave the complete reporting for sites like dpreview, etc, etc.

Canon had all their big guns out as well as their hot new lenses. Obviously, the cameras getting the most attention were the Canon 5DS and 5DS R, their 50 megapixel super DSLRs.

I tried the 5DSr and low and behold…it looks and feels like a 5D! I don’t know what else to tell ya! It feels good, it’s dependable, it’s a 5D series camera. Nothing super exciting, but you know it’s going to get the job done.

The Canon rep did ask, to my surprise, if I wanted to put a card in there and try it out. Of course, I didn’t have a card on me! All these years I’ve gotten used to the idea that manufacturers won’t let you put a card in their demo cameras so I didn’t bring one.

But I don’t regret it. What will I get? Some boring pics of the crowd at the expo? All the samples I need, I can find on the web anyway.

Canon did have some really nice large prints showcasing the capabilities of these cameras.

Prints from the Canon 5DS and 5DS R. I walked right up to the print and saw hairs on the model’s nose. That’s resolution for you! 🙂

They looked gorgeous, superb, but not mind-blowing. I’m not taking anything away from these incredible 50mp cameras, but I didn’t think the prints were anything that you couldn’t do with today’s crop of 20+ megapixel cameras. It’s really a new day in photography when one has a hard time being impressed with 50mp prints!

I did ask the Canon representative if there was a 1DX replacement coming any time soon. The 1DX is nearly five years old now and seems due for an upgrade. The answer was that they do not know. Are you surprised? 🙂

Canon also had all their new lenses out, and I had a good time looking at them, although it’s not like I’m going to be getting any new lenses any time soon.

Nikon had their usual DSLR lineup at the show. Of course, the D4s was there, the Df, and surprisingly the very old D3X was also on hand.

All their big daddy lenses out for all to drool and fool around with. Nothing new as far as I can see.

UPDATE 11/01/15: Just want to pass along some info for our Nikon fans out there that I have been informed of HUGE instant rebates going on for a limited time. You can check out all the Nikon deals HERE. From what I can see some of the instant savings are up to as high as $1100!! on certain Nikon camera/lens combos. If you’re looking to buy new Nikon stuff, this is the time to do it!

You may also find the Nikon deals HERE. While browsing/dreaming, I was amazed at the deals and wish I had the funds! For example, you can now get a new Nikon D7100 for close to the price of a USED D7000. This is a screamin’ deal for some of Nikon’s hottest cameras and lenses.

I had a good time checking out the new Sony A7RII and A7SII, I couldn’t get my hands on the RX1R II due to lack of time.

The new cameras felt great, but to tell you the truth, since getting my A7R last year I have very little interest in spending any more to ‘upgrade’ a camera that works well for my needs.

I’m finally at a point, thank God, where I really am not interested in the latest and greatest!

Note: Still editing pics, I have some from the Sony booth that I may post. Maybe, maybe not 🙂

Fuji had a hot booth showcasing their latest cameras and lenses. I was impressed with the prints from the X-T1. If my old X-Pro 1 had focused anywhere as good as the new Fujis, I would’ve never given up on the X system.

The ever popular Fujifilm spot.

Fuji also had a very cool “retro” area showcasing their popular line of Instax cameras. I give Fuji a lot of credit for being one of the very few manufacturers still dedicated to making instant cameras and instant film.

Fuji posted some wonderful pics, mostly from their X-T1 cameras.

Aside from the Leica SL (Typ 601), the only other camera I really wanted to see at the show as the fabled Ricoh/Pentax full-frame. Apparently, they had a near complete mock-up that was shown early on in the show, but it was no longer there when I went on Saturday.

My thoughts on this? Ricoh/Pentax…guys, enough of this hide and seek! If it’s that hard and if it’s going to take you that long to bring out a full-frame DSLR, don’t worry about it! It may be a showcase product, but it’s not like you’ll be selling a boatload of these vs Canon, Nikon, or Sony.

I’m a huge Ricoh/Pentax fan, but they’ve taken way too long with this thing. I’m all for “getting it right” and maybe that’s what they’re doing, but the longer they take, the more likely the tech inside the camera will be outdated.

They did have the awesome 645Z there and the images I’ve seen from this camera at its best eclipses almost anything else out there. At $6995, you can get this 51mp digital Medium Format camera for less than the new Leica SL! Wow!! 🙂

“You Know You Want It.” Ricoh/Pentax rep and customer debating on the hot Pentax 645Z camera system 🙂

Zeiss was on hand with all their HOT lenses! However, I don’t see myself being able to afford one of these any time soon 🙂

Hot lenses!! Who doesn’t love Zeiss? I don’t even know one photographer who doesn’t 🙂

FINAL THOUGHTS ON THE EXPO

The PhotoPlus Expo is always a lot of fun, especially if you’ve never been there. But every year, the cameras and lenses have gotten better to the point where I feel it’s no longer all that exciting…for me, anyway.

I go there to check out the latest gear, yes, but I also go to hook up with good friends who I haven’t seen in a while. Sadly this year I wasn’t able to go on the day when the “Dream Team” was attending and they know who I’m talking about! Sorry about that, and hope to hook up in the near future 🙂

Let me say this; if you have a modern Canon, Nikon, Sony, Pentax, etc, you probably have a camera that’s “good enough” for your needs. We are very lucky to live in an age where cameras can do what they can do, I love it! That said, the better these cameras get, the more film I shoot 🙂 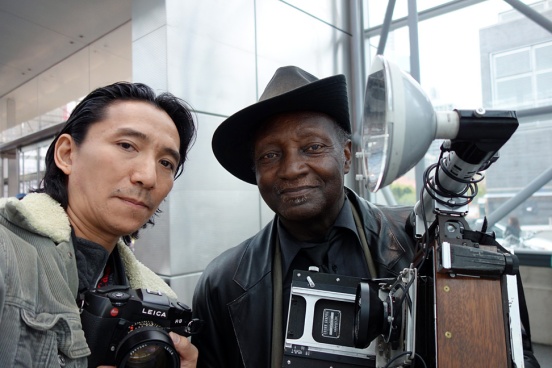 “Film Buddies.” With my analog brother, Mr. Louis Mendes, NYC street photography icon. The Master Blaster has always been good to me and I consider him a friend and an inspiration.

I apologize to anyone who found this report lacking. I know there are a lot of Canon, Nikon, and Sony fans who probably wanted a little more.

I’m not a reporter. I’m a fan. I went to the show as a fan of these manufacturers and their products, and I am relaying what I saw, what I experienced.