His Majesty King Bhumibol Adulyadej could almost always be seen with a camera in hand or around his neck.

On October 13, 2016, His Majesty King Bhumibol Adulyadej of Thailand, also known as King Rama IX, passed away at age 88. He was the longest reigning living monarch up until the time of his death.

Normally, that would not be a topic on a camera blog, but the King had three things going for him in this respect to this particular blog; He was Thai, he was a photographer, and he seemingly loved cameras! Today, I remember him from this aspect.

Before he passed away, I had been searching for photos of the King with a camera because I had a couple of film EOS Rebel cameras and I wanted to pin down which one the King used. I found many photos online, but the best one I found was right in the place where I was staying in Thailand, as shown in the photo above.

The King, especially before the final years of his life, can be seen almost always with a camera around his neck or in his hand. His camera brand of choice seemed to be Canon. I remember seeing him in pictures with what appeared to be an EOS 1000 (Rebel) in the 1990s. Later on, he moved on with the times with a digital EOS Rebel. I do remember seeing photos of him with other cameras, such as a Yashica T series, but it was rare. It was almost always a Canon.

I don’t know if it was a calculated choice or not, but I’ve always admired the fact that this man, a King, and according to Wiki, the richest monarch in the world would be seen with the lowest model Canon SLR or DSLR. He could’ve used any camera he wanted, but he was always seen with the most affordable, low budget, entry level camera.

The King was a man of the people. Perhaps that’s why his camera of choice was something the everyday man could relate too. He had a deep affection for the Thai people and in return he was and is revered in an almost god like manner. When love is given, love is returned. Even now, the country has gone into one year of mourning. Not just one week or one month. One year. 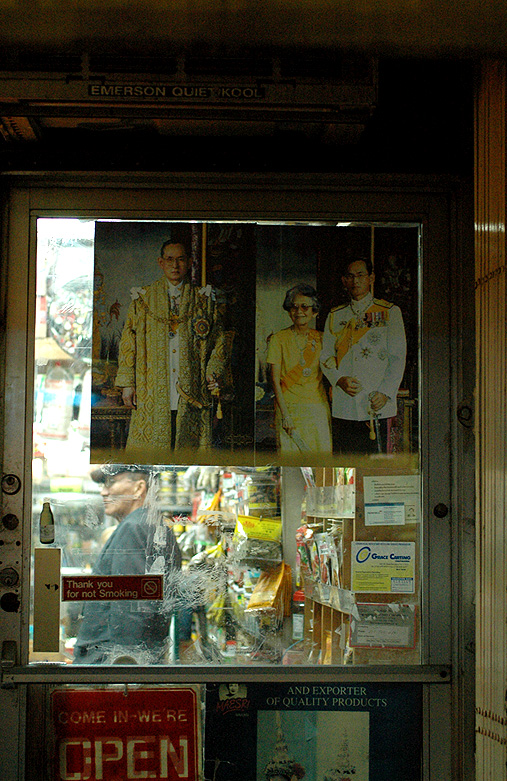 My late Dad was an old school Thai man born in 1932. He came from an era where Thai people were not encouraged to “show off” as it was frowned upon. I always remember Dad saying “Don’t show off. Don’t show off.”

The King, born five years earlier in 1927, probably came from the same mind frame. This could have been the reason we saw him with what I could only call “the people’s camera” as opposed to carrying the latest and greatest high end cameras which he certainly could have had at his disposal.

Strangely, while searching online, I could not find much about the King’s photography itself. We knew he always had a camera with him, but what of his photos? Perhaps, like many good folks I know, he just preferred to keep his shots to himself. I know some phenomenal photographers whose work has never been seen by the public, only from the photos they send me via email 🙂

As I said, when love is given, love is returned. Since it was well known that the King loved photography and cameras, the camera companies honored him with commemorative or special edition cameras such as the 1996 gold Leica M6 “His Majesty King Bhumibol Adulyadej of Thailand 50th Anniversary of His Coronation” edition with matching gold 50mm f/2 Summicon. I believe there were also Hasselblad and Contax special edition cameras for the King of Thailand as well.

King Bhumibol was a very special monarch and truly beloved by his people. He was the only King many Thais ever knew. His image can be seen everywhere throughout the country. It seemed like he would always be here forever, but he has moved on to that great palace in the sky.

I loved him for all the same reasons most Thai people do. Quite, humble, engaging, caring and giving. But he also has a special place in my heart because he was a photographer and a camera lover. There has been no King or Queen that connected to us camera nuts more in that respect. Rest in Peace King Bhumibol. You will always be a Camera Legend.

11 thoughts on “King Power: Tribute To The King”