Hello everyone! Looking back on my writings, it seems we haven’t had one of these “Best Camera I Never Knew” postings in a while! Over a year in fact!

So today we’re back with a camera that may not be well known to the masses, but is quite popular on photo sharing sites like Flickr and elsewhere. And you guys, my dear readers, are NOT the masses! It is a cult favorite, the Super Ricohflex.

The Super Ricohflex was introduced in 1956 by Ricoh of Japan. It is a Medium Format twin lens reflex camera that takes 6×6 images on 120 film.

At its heart is the taking lens which is an 80mm f/3.5 Ricoh Anastigmat. It uses a geared focusing system much like the Kodak Reflex of 1946.

“Super Ricoh Man” 2009. Super Ricohflex, Ilford HP5 Plus in T-Max Developer. More than a narcissistic selfie, I hope you can see that stopped down a little, the Super Ricohflex is capable of nicely sharp images 🙂

When in working condition, the Super Ricohflex is capable of giving images with “character” especially wide open at f/3.5. That is the best way I can describe it.

The 80mm f/3.5 Ricoh Anastigmat is one of those lenses capable of giving you that ever popular on Flickr “swirly bokeh” look.

“Escape To Reality” 2009. Super Ricohflex, Ilford HP5 Plus in T-Max Developer. An example of the swirly “dreamy” image that the Super Ricohflex can make.

In my opinion, this usually comes from a lens that is optically not at its technical best, and the swirly bokeh is somewhat overplayed by bokeh fanatics, but that said, if used judiciously it can produce “dreamy” memorable images.

Stopped down, the images can be very sharp at f/5.6-f/8 as are most decent lenses.

For those of you who prefer to watch a video, here is my first “The Best Camera I Never Knew” episode on YouTube starring the Super Ricohflex! 😎

It may seem like a shameless plug, and it is, but I am trying to expand your experience here and I’ll be tying in videos as I can so get used to it! 🙂

Think of it this way? Why would I want to do double work, blog and video, when I could just do one or the other? If it weren’t for you guys, my fellow Camera Lovers, I’d not bother with the videos!

And because I had received a critical comment from a reader who did not understand what  this series is about, I address this in the video too. Plus trying out some new theme songs haha! 🙂

WHY IT DIDN’T JIVE WITH ME?

Simple. I had three of these cameras! I got my first one in 2009. I sold one and I still have two. All three of them ended up having the infamous “Frozen Focus” issue. And what is that?

In the introduction, I mentioned that these cameras use a geared type of focusing mechanism. What that means is the viewing lens and taking lens are geared together and by moving one you move the other.

That in itself shouldn’t be an issue, but whatever grease Ricoh put into these lenses have been known to notoriously seize up with time.

Out of my three copies, only one was working, and even that one was already on the outs when I got it. It was not perfectly smooth. I left it on the shelf for about, I’m gonna guess cause it’s been years, but approximately 3-5 months. The next time I picked up the camera…stiff as a rock!!

So as of today, the two copies I have are pretty much worthless as shooters. Thankfully, they did not cost me much!

A competent camera technician should be able to repair these cameras. From what I have heard, it’s not a simple matter of taking the lenses off and regreasing them yourself. It’s a bit of a delicate process. Therefore it’s better to leave it up to the experts if you have no experience with camera repair.

One person I remember offhand that might do the repair is Mark Hansen out of Wisconsin. He’s a great repairman with a solid reputation for working on Zeiss and Rolleis. I believe he is still in business though I do not know if he’s willing to repair the Super Ricohflex and if he is, how much it will cost. If you contact him, tell him Sam from CameraLegend.com sent you!

PRICES & WHERE TO BUY?

If seeking one of these cult classics, and I’m not sure that’s a good idea, prices are trending at $20-60. Keep in mind, due to the possibility of the camera needing a CLA, the low price you might pay belie the true cost after the camera has received a CLA.

However, once you get a CLA from a good repairman, I can attest that the Super Ricohflex is a good and fun budget shooter.

As I love all cameras, it is not my goal to pick on the Super Ricohflex. Ricoh is a Camera Legend whose cameras I have used and praised often. I do totally understand that a camera this old may need a CLA as most cameras of this vintage would benefit from also.

However, as I mentioned in the video…This is no Rolleiflex. And it was not intended to be. It cost much less than a Rolleiflex or even most Rolleicords, the budget Rollei TLRs.

A Rolleiflex could be sitting there for 30 years and I’d be willing to bet, most would still be functioning. Not so with the Super Ricohflex. If you have one, use it often, keep exercising those gears! Whatever grease Ricoh used in these cameras are infamous for freezing up.

That said, when it worked, this camera gave me some memorable images that left me curious for more. That’s why I ended up with three of them only to find out that the Super Ricohflex is indeed, one of the Best Cameras I Never Knew! 🙂

Right now, for a limited time, get a great deal on the hot and capable Fuji X-A3! Hurry this won’t last long, great savings just in time for Christmas!

The kit is usually $599. Buy it now through our trusted affiliates and get it for $349. That’s real savings!! 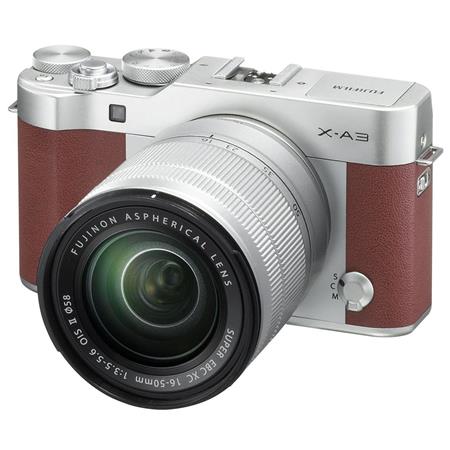 6 thoughts on “The Best Camera I Never Knew: The Super Ricohflex”