Continuing on my “cheap cameras” theme for this week…

If some of your best photographic memories come from the 80s, 90s and early 2000s, then you’ve probably followed the same photographic path that I have.

This is the story of the days when your host and author here used nothing more than one camera and two lenses. I know it’s hard to believe after all the cameras profiled here, but yes there was a time when that was all I needed 🙂

Perhaps you too have gone through that period. Do you ever wish you could go back to a simpler set of gear and just focus on photography?

The camera for today’s subject is the Canon EOS-10s.

The EOS-10s is a 35mm autofocus SLR film camera introduced by Canon in 1990. It is also known as the EOS-10 or 10QD elsewhere around the world.

Quick specs include your standard P/S/A/M modes, flash synch at 1/125 and a shutter speed range from 1/30 to 1/4000 which puts it in the amateur/enthusiast category. It also had a unique and gimmicky bar code reader thing. Not worth mentioning, just Google it if you’re interested in that!

This story is NOT about the Canon 10D digital camera! If you came here by accident because of the 10D, I’m telling you now so you won’t waste your time. And yes, I’ve used the 10D too but it’s a topic for another day 🙂

While a humble looking camera, the EOS-10s included a major innovation at that time which Canon called Multi-Basis AF which was a fancy way of saying that the camera had more than just one AF point 😊

It had three in fact! Apparently the three AF points could “pass off” the subject it tracked from one AF point to another. This was major back in 1990! And just one of the many things that made Canon so respected as an innovator in the camera world.

I got this camera in 1994. I was a poor student and while waiting for friends at a college library, I spent an afternoon reading almost all  of the library’s Popular Photography magazine! Big mistake because that’s how the second wave of my camera obsession came about 🙂

I had just about given up on my Minolta X-700 which I had used since 1985. It had developed a battery drain problem and even though I sent it in for Minolta to repair, the problem came back within a few months.

I was basically without a camera, except for my crappy Vivitar PS-20 point and shoot. I came across a review about the Canon EOS-10s and was fascinated by the (then) new Multi-Basis AF.

My friends showed up hours later, but I was quite content to read all that photography stuff! I was also several hundred dollars poorer because I knew I had to have that EOS-10s that I did not yet have the money for 🙂

Anyway, a few months and several paychecks later, the EOS-10s arrived and I held in my hands my very first Canon EOS camera. What a feeling it was back then!

Obviously a camera is useless without a lens, so I went around to several local camera shops (and there were more local shops around back then) and I came back with what today may be seen as a very cheap lens: the Sigma 28-70mm f/3.5-4.5 UC. I think I spent around $70 for it. I also eventually got a telephoto, and I settled for a cheap Canon 75-300mm f/4-5.6 USM first version.

As you can see folks, I started out with a humble two lens kit like everyone else! I cut my teeth learning the craft on cheap lenses. I should’ve just learned from my X-700 days and gotten a 50mm f/1.8 lens from the start but I wanted something different.

The EOS-10s felt good in my hands. I knew nothing of pro bodies at the time. I mean I read about them but didn’t think of getting one, nor could I afford one till much later.

While this is not a full out review, I can tell you that I never had a problem with the autofocus. It almost always delivered the goods. The fact that they AF points lit up in RED was a revelation at that time! Exposures were almost always spot on.

Below are some photos from circa 1995. Most of the photos are from a trip to Thailand in 1995. It is a beautiful and fascinating place to photograph! If you have the opportunity, do so. You will never run out of photo ops! I was quite content with my cheap camera and two lenses. All I wanted to do then was to take photos!

Here are some photos from the Canon EOS-10s and my two “cheap” lenses. Where ever possible, I will state in the captions what I observed and what I may have done differently now that I can look back 24 years later. 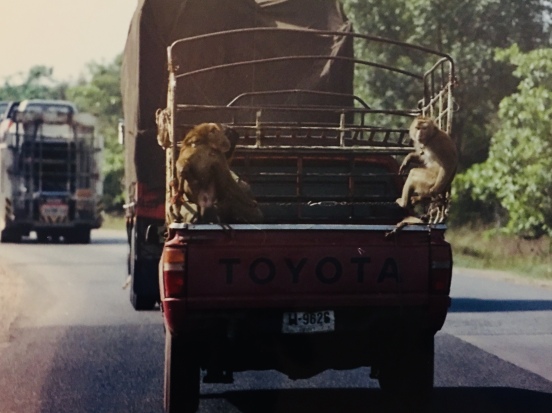 “Working Monkeys” 1995. Canon EOS-10s, EF 75-300mm f/4-5.6 lens, film unrecorded. I’m an advocate for developing your eye for interesting sites, but this one was easy! I caught these working moneys riding the back of a Toyota in Thailand. The monkeys are used to climb coconut trees and have been taught to get the best picks. 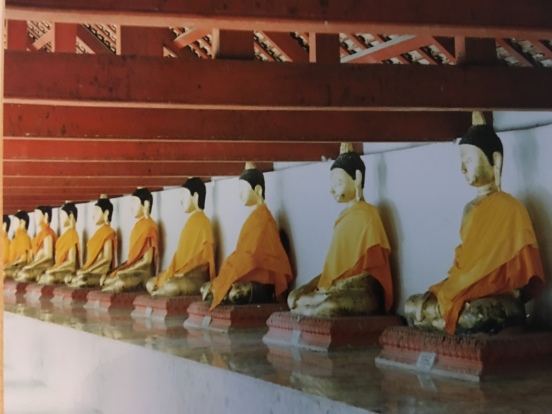 “Ten Buddhas” 1995. Canon EOS-10s, Sigma 28-70mm f/3.5-4.5 UC lens, film unrecorded. Here’s an example of how I might have shot this different today. Looking back I probably should have used a large aperture lens, angle it differently and get one Buddha in focus while the rest are out of focus. Hmm, or is that perhaps too trite, to cliched a shot? 🙂 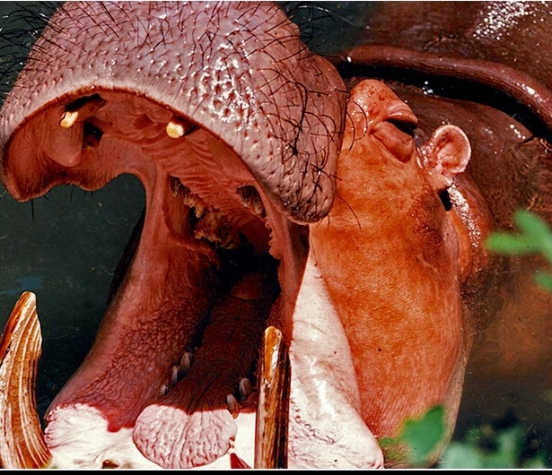 “Big Mouth” 1995. Canon EOS-10s, Sigma 28-70mm UC lens, Kodak Ektar 25. The hippo opens his big mouth at the Bangkok Zoo. At that time the now long discontinued Kodak Ektar 25 was touted as the “sharpest print film in the world” and my 13×19 prints confirmed this. What I learned is that even consumer grade lenses can be very sharp when stopped down, something we all know but kind of downplay today so we can keep buying expensive lenses right?  🙂 Of course, the the Ektar 25 no doubt film helped the sharpness! 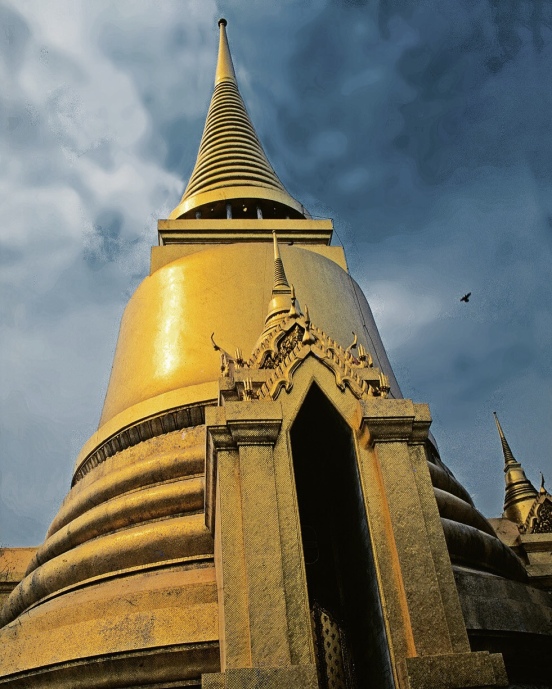 “Wat Phra Keo” 1995. Canon EOS-10s, Sigma 28-70mm UC lens, Kodak Ektachrome. One of the many magnificent structures at Wat Phra Keo in Bangkok, the most famous of Thailand’s many temples.

“Koh Samui” 1995. Canon EOS-10s, EF 75-300mm f/4-5.6, film unrecorded. Just one of many beautiful views on the island of Koh Samui, Thailand. The trees and the hill may give a sense of scale. I used a telephoto because this was actually farther out than it looks.

The Canon EOS-10s doesn’t get a lot of love in today’s world. It seems to be viewed as an evolutionary camera, as far as Canon’s camera order goes, but it could and should also be considered revolutionary considering the advanced technology that was implemented into the camera.

The three MULTI-BASIS autofocus points that light up in red may seem like nothing today, but it was an amazing and useful feature that pushed forward the complexity and accuracy of autofocus cameras.

In today’s world of cameras with hundreds of tiny and precise AF points, using a camera like the EOS-10s with its three “large” AF points, right in the middle of the viewfinder , is a refreshing experience.

In fact, to this day, I’m so old school I still prefer using the center point AF in every autofocus camera I own!

The Canon EOS-10s may never be considered a true Camera Legend as it is overshadowed by so many other cameras, Canon and non Canon. However, when you consider how it helped push autofocus cameras forward, you can’t help but have a little respect for its place in camera history. That plus the fact that it was my first EOS camera! 🙂

The Canon EOS-10s is dirt cheap and under-appreciated in today’s used camera market making it a great buy for the budding film photographer, or a seasoned pro wanting a cheap entry back into film.

Main problem or weak point might be the mode dial. They may wear out over time, but mine never did and I used it a lot back in the 1990s. The A2E that I also used later on has the same problem and I can attest that the dial on mine broke after a few years.

If seeking one of these, prices are trending at $10-40 USD. I wouldn’t pay more than $15-25 dollars. If it’s working you have a nice, if unassuming camera, that will deliver the goods!

The lenses, ah, probably not worth mentioning but you can find both of them anywhere from $5 to $35 or even better, FREE! Just keep looking! But any similar budget lenses will do, don’t knock yourself out over these lenses!