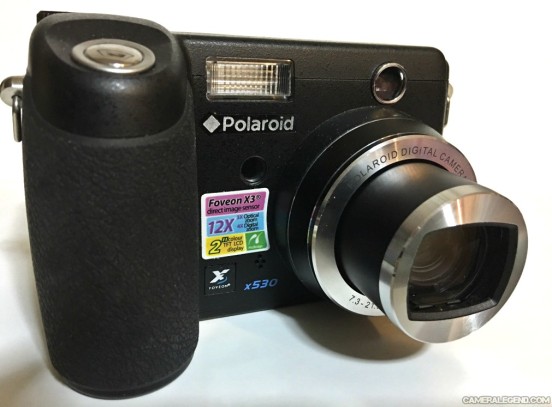 Founded in 1937 by Dr. Edwin Land, the creator of the famous Land Camera series of instant cameras, Polaroid has over the years strayed far from the original company and became known more for selling items they imported/distibuted and rebranding them under the “Polaroid” label, rather than actually making the products themselves.

The actual maker of the X530 camera is somewhat of a mystery which we’ll try to solve today. At its heart, and the thing that distinguishes the X530 from any other low budget point and shoot camera is the tiny but powerful 1/1.8″ Foveon X3 sensor. The official specs say the camera has 4.5mp, but compared to Bayer sensors, it is something more like 1.5mps. I suspect most of our readers will already know about the Foveon sensors used in popular Sigma cameras.

If not, just know that the Foveon sensor is laid out differently from the well known Bayer sensors found in the majority of digital cameras. The difference, as is often said, is that the Foveon sensors can, pixel for pixel, deliver higher clarity, color fidelity and resolution. So a Foveon sensor with for example, a 5mp sensor delivers almost 15mp’s in Bayer terms. That is the theory anyway. As always, if you’re interested in this technology, I recommend my readers to do a little research with that “search” bar on your favorite web browser 🙂

The X530 body itself, to me, looks like it could fit right in with the cheap Vivitar, Sakar, and yes, even Polaroid point and shoot cameras that you might find at CVS, Walgreens, and Best Buy. You know, those really cheap, under $50 cameras that you see while you’re waiting on line in those stores. Let’s face it, we sometimes get curious about those cameras, but since we are more “serious” photographers, we could never get ourselves to buy one of those cheap cameras, could we? 🙂

Anyway, as I said before, the main thing that distinguishes the X530 from those pharmacy store cameras is the Foveon sensor in it, and to its credit, that’s a biggie.

If it sounds like I’m cutting down, aka “dissing” the X530 body, I’m not but maybe I am! For me, I was actually attracted to its low budget looks. I’ve always loved cameras that looked like underdogs, but had monster sensors under their covers. That’s why I loved the Ricoh GR series. That’s why I wanted to love the X530.

The zooming action was smooth, albeit slow. The AF was moderately slow, but perfectly adequate for stills I would imagine.

Now right here is where I have to stop. I have to tell you image quality remains a mystery to me. Why? Because the damned thing is not working!!

Well, the camera itself works fine. Everything seems to function, but the sensor itself is dead or seems dead. All I get are black frames. I have tried everything I could to resurrect it, short of taking it apart, which I’m tempted to do.

But most of what I have seen on the very few X530 links on the web shows this camera to have very good to excellent image quality, at its best. It does seem to show that Foveon “pop” that I have seen in the Sigma cameras. This is probably as much of a testament to the talented photographers who used the X530 as it is for the X530 itself.

Legend has it that the X530 was recalled before it was supposed to go to market, but that some shipments were sent without this knowledge or without approval, thus making it into the hands of a few lucky photographers. At least, that’s what I’ve read on the web.

At the same time, I also read a press release from 2005 saying that Polaroid was announcing the X530’s availability in the U.S. through Circuit City and Walmart.

My opinion is that it was indeed available, but only for a very short time before Polaroid pulled the plug on it.

This is not unprecedented. It has happened very recently with a Polaroid product called the Polaroid Socialmatic. The Socialmatic was an Android based camera with a cool “Instagram” look to the design and what appeared to be a working tablet on its LCD screen plus an onboard printer for quick prints.

This product received a lot of hype prior to its release in 2014, but Polaroid quickly pulled the plug on it shortly after it came to market. As I had been curious about the Socialmatic myself, what I gathered by looking at sales and auctions was that the camera had some reliability issues relating to its battery and operations. Most of the ones for sale had dead batteries and could only be used while plugged in using a charger.

The apparent replacement for the Socialmatic is the Polaroid Snap which is still on the market and seemingly doing well. The $99 or under Snap seems to be what Polaroid had hoped the Socialmatic should have been. For me though, I wanted that on board tablet and the Socialmatic’s cool looks so I’ve passed up on the Snap for now. And I’ve stayed away from the Socialmatic too because of its issues.

And I would’ve stayed away from the X530 except I got it for $30 and because I collect old, weird and decrepit cameras 🙂

The Polaroid X530 is scarce. At the same time, it’s not like there’s a lot of people looking for them, save for hardcore Foveon fanatics.

I like the Foveon concept and its images, but I don’t think I’m what you would call a hardcore fan. I was a very early Foveon enthusiast in 2003 or 2004, I greatly enjoyed the Sigma SD14 in 2007, and have used several DP models. However, there was always something that kept me from crossing the line into fanboy territory. That’s a subject for another time, another post.

Again, I did not seek out the X530. I was actually looking for something else entirely when I came across this one. I did have a passing interest in the camera many, many years back, but I could never find one when I was looking, plus there was and still is very little info on it.

I got the camera with box and everything for $30. It looked mint, the functions performed smoothly, but as I said the sensor is dead. I use it now as a decoration in my homemade camera “museum” 🙂

Do remember that you can get a Sigma DP1 for a little over $100 these days and the DP2/DP2s for a little more than that and they will do everything better than the X530 could.

I would not call the X530 a Camera Legend, but certainly an interesting model in the legend of the Foveon sensor with an interesting history behind it. If you can find a working one under $100, consider yourself lucky and I’d love to hear from you.