So today marks the sixteenth anniversary of the September 11th attacks that changed America and indeed the world forever.

I can hardly believe it’s been sixteen years, it felt like yesterday. To give you some context of the timeframe, sixteen years before 2001 was 1985. Now that feels old, doesn’t it?!

It’s not my intention to revisit in complete detail, the tragic events of that day.  We all know by now what happened on that fateful day.

I would just like to give you a personal recollection of that day in 2001. Before I go further, I would like to say that I think we should all take a moment of silence to remember the victims of this horrific attack.

Note: I uploaded some of these photos from my phone and for some reason they do not seem proportional, but you can click on the photos to see a larger image. The second image, which is the one of my Dad on top of the South Tower I think is particularly impactful in the larger size version.

On September 11, 2001, my only plan was to go to work as usual. At that time, I was living in in Westchester County, a suburb of NYC.

My shift was 12pm to 8pm, which was perfect for me as a night owl. I woke up that morning just a little before 11am. As you know, by then everything had happened but of course I didn’t know that yet.

I got my morning bowl of cereal and turned on the television. As soon as the tv came on, I saw what seemed to be some kind of breaking news. I saw a reporter speaking with urgency. I saw the captions “World Trade Center attacked and destroyed.”

I remember thinking what is this? What do they mean “attacked and destroyed?” I turned the channel to see what was on the other stations. This time, I saw what seemed to be a cloud of smoke over all of lower Manhattan.
I was in shock. Then I remembered that my Mom had gone downtown for something to do with her application for American citizenship. Somehow, I thought this appointment was supposed to take place in or near the World Trade Center.

I tried calling my brother who was living downtown. I could not get through, there was a disruption in telephone service. I tried calling my Dad, no service again. Mom did not carry a cell phone at that time. If you remember, cell phone service was just becoming big but not everyone had one. It was a good six years later that the iPhone was be introduced.

I was wrecked with worry. I used to smoke and I must have been chain smoking that morning from all the anxiety.

Finally, I got a call through to my Dad. He told me he had heard from my mother and that she was alright and so was my brother. I was so overwhelmed with relief that I broke down and cried over the phone. I just couldn’t help it.

Any New Yorker will tell you, this attack was very personal and it hit us hard and straight to the heart.

“Nothing Last Forever.” 1996. Dad standing on the top of the South Tower, seemingly quite uncomfortable! I can tell you, personally it was a bit scary up there, but then again I’m afraid of heights! Photo shot with a Canon EOS A2E and EF 28-70mm f/3.5-4.5 II. Film unrecorded. Today, the Twin Towers are gone and Dad is gone. A sad reminder that nothing last forever. God Bless.

THE FOLLOWING DAYS AND WEEKS

The days following 9/11/01 were some of the most depressing that I could remember. Especially in New York, things were eerily quiet. I remember how calm and quiet things were, and it was so unlike NYC. I think everyone was shocked, scared, and even worried about what happened and what might happen next.

I used to go downtown often. I took classes downtown and used to walk around at night with my camera.

For maybe a week or two, they restricted access to Ground Zero, but I remember that I was able to get close enough to see the remnants of the once mighty Twin Towers. It was such a sad sight to see the rubble and still smoldering smoke coming from where the towers once stood.

There was ash all over lower Manhattan, almost like a volcano had errupted or something. Those were some sad days in America.

I’m putting this in for my fellow camera nuts, just because I know this is what would be most interesting for you guys 🙂

Taking a ride in the “Time Machine” I recall my two main cameras at the time were the mighty Nikon F100 film camera, paired with a nifty fifty 50mm f/1.8 AF-D Nikkor and an Olympus C-3000 digital point and shoot that I got in 1999.

At that time digital a new niche that was just coming into focus, but still not yet taken very seriously by die-hard photographers. Flash forward to 2016 and now film is the old niche and digital is the mainstay.

I sold that F100 (have another one now) but I still have that C-3000 which I kept because it’s my first ever digital camera.

Sixteen years on, one could do a lot of analysis on what happened that day on September 11th of 2001.

I’ve heard that the attacks were a way to drive the US Military out of the Middle East or draw America into a war thinking the USA would quickly withdraw as they did in Vietnam. If so, it backfired big time because as far as I can see, America is going to be there for a good long time and it’s a direct result of the 9/11 attacks.

I could understand the grievances on both sides, but there’s never a good excuse to go and kill thousands of innocent people.

Now we have long, drawn out war. Thousands of lives lost on both sides. Was it worth it? No I don’t think so. War is never worth it. But it’s not surprising. If everyone were loving each other the world would be a better place, but then again, that place wouldn’t be on Earth. I suppose that would be heaven.

I miss seeing the Twin Towers that I grew up with. I admit that they weren’t the prettiest buildings in the world. In fact, at times they seemed downright scary, but I miss them. I used to see them every day on the train to high school, going into Brooklyn. I photographed them many times over the years. I marveled at them, but never fully appreciated them till they were gone. Isn’t that the way it always is? They say “You don’t know what you got until it’s gone” and they are right! Now I feel honored that I have been inside and even up on the roof of these legendary buildings. 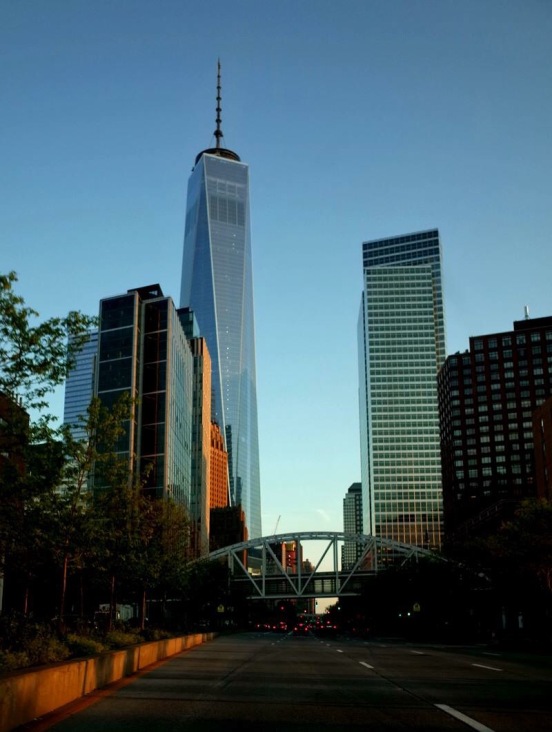 The Freedom Tower is the new icon of NYC and a symbol of the city and the country’s resilience to rise from the ashes of the tragic events of September 11th 2001. Photo taken with the 16mp Ricoh GR in 2015. I have yet to do a review of this camera!

I’m not a big fan of the new Freedom Tower, I don’t think it has the same visual impact but maybe it just takes some getting used to. In fact, I have adjusted to seeing it and in its own way, it is becoming an iconic sight. I wished they had rebuilt the Twin Towers to be duplicates of the ones we lost, but I know for many reasons why they couldn’t, wouldn’t do that.

Sixteen years later, I think it’s clear that America and the American people are very resilient. This hit home and those who remember this day, we will not ever forget it. The Freedom Tower is a symbol of that resilience. As horrific as the events of 9/11/01 were, people went on with their lives and they will continue doing so. You can knock down buildings, but you can’t kill the American spirit.

Anyway, I could write a whole book on this, but today please take a moment to reflect on the innocent people who suffered that day and their families who suffer to this day. Whatever you believe, when you put yourself in the shoes of what these people went through, it’s hard to imagine their pain. God Bless them, and God Bless America.