As some of you may have seen in the news, the Taal Volcano in the Philippines erupted on January 12, 2020, the first time it had done so since 1977.

Usually when I hear news of amazing natural events such as hurricanes or volcanoes, I’m fortunate enough to be nowhere nearby. It’s usually in some far off land that I’ve never been to. You probably know that feeling!

But the Taal Volcano is different because while it is far away from where I live, I have seen the volcano in person many times over the years during my trips to Southeast Asia. Even though I’m not Filipino I love the Philippines!

Seeing a natural wonder such as a volcano whether it’s erupting or not is amazing. And its proximity, being just about an hour or so away from the capital of Manila, made the Taal Volcano a popular destination for quick getaways for many urban Filipino families.

In fact, a whole slew of businesses have been built around this volcano. Businesses such as hotels, restaurants, sightseeing and even amusement parks are built on the scenic views of the volcano in this region. Even wedding photographers are known to use this area and the Taal Volcano to enhance their images. It’s a natural wonder and a great photographic subject!

From my own experience, the four or five times I’ve been there, it’s hard to get a good detailed shot because there is perpetual haze, probably due to the high elevation and the fluctuating temperatures caused by simmering volcanic activity underneath the Taal Lake in which the bulk of the volcano resides.

But in 2011 I caught my best and clearest shot ever of the volcano! Now keep in mind I’ve always been told that the front “cone” you see is not the volcano itself. The actual volcano resides behind it. 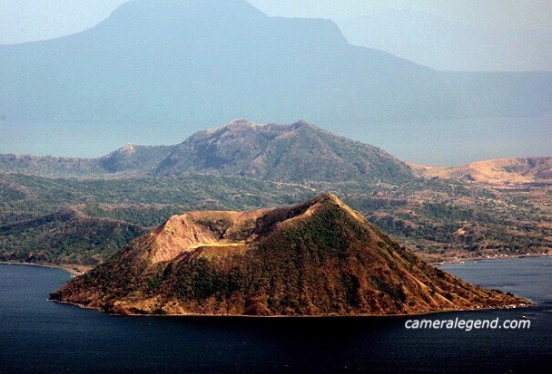 The part that looks like the volcano is just a part of the whole volcanic system but it is the view most people actually see and photograph when they go to see the Taal volcano. To get to the heart of the volcano I understand you have to arrange a boat trip.

For this shot I used a Canon EOS 5D MKII, my main digital camera at the time. The lens used was the EF 135mm f/2L.

The damage to the nearby areas and loss of life have been reported to be low but it’s still a bit early to assess and scientists think there’s a chance a second eruption could come soon.

My sympathies and prayers to those who have suffered losses during this natural even which could have been a disaster had it caused more damage than it did. Stay safe, praying that the Taal does not blow its top again!

Here’s our lens spotlight for today and it’s the Industar 61 or otherwise known as the Industar 61 L/D. It supposedly has lanthanum, a rare-earth element in the coatings. Some people say it’s radioactive some say it’s not. All I can say is it’s a wonderfully affordable lens with character! 😎📸

The Industar 61 comes all the way from Ukraine and is said to be a Tessar formula. While mine is the 55mm version, I’ve also seen 52mm & 53mm versions of the same lens!

I’m not usually a fan f/2.8 prime lenses only because usually you get a choice of faster f/1.4-f/2 in the 50mm range of lenses but I can vouch for the nice sharpness and lovely and characteristic bokeh out of this lens if you get a good copy.

Best of all it’s $20-30 if you don’t mind waiting a month or more for it to arrive from our friends in the Ukraine! Why spend more on a Leica Elmer? 😀

One thought on “Flashback Friday: The Taal Volcano Plus The Industar-61 55mm f/2.8 Lens”