It may seem out of place on this site where classic film and digital cameras are profiled but as the first cell phone camera with a headline grabbing 41 megapixels, the Nokia Lumia 1020 is actually a perfect fit here.

The Lumia 1020 was introduced in 2013 as a modern day smartphone that runs on Windows 8. It has a touch screen and is capable of doing almost anything else a phone from 2013 could do. Its main distinction from the competition was that the phone held a 41 megapixel sensor inside. Yes, 41 megapixels in a cell phone! In 2013, that was more megapixels than almost any consumer camera on the market, point and shoot or DSLR.

To keep the record straight, the Nokia 808 Pureview was the first Nokia with a 41 megapixel sensor. However, it ran on the Symbian operating system which a lot of people don’t know about, and this probably kept a lot of people away. The 1020 aimed to go after the market that the 808 missed.

When I first heard about this phone, I was interested in it, as any gadget freak would be. However, as a photographer and lover of traditional cameras, I was more than a little skeptical.

The camera does have a front facing camera as well, but that one only does 1.2 megapixels of resolution.

While the camera does have a 41mp sensor inside for the main camera, the actual highest resolution that the camera churns out is about 38mp. Due to slight cropping from the aspect ratios available, some pixels are lost. There may be more to this technically, but that’s how I understand it. However, 38mp is close enough to 41mp that you’d not likely notice the missing 3 megapixels 🙂

Hey listen, I won’t claim to understand all the thingamajigger behind this technology. Wiki has an excellent page on it and there are other reviews out there that can explain it much better than I can.

For easy file sharing, the 1020 uses an over-sampling technology where the 41 megapixel images are reduced to a 5 megapixel files without loss of quality. You can get the full resolution of the camera when using Nokia’s photo transfer app.

As a camera, it is very slow. The shot to shot time, the AF, the shutter lag. All slow. You will not be taking any action shots with this camera, even at low resolution.

If you hit the “shutter” icon, it will sometimes miss its target while focusing. The best way I have found to get consistently sharp shots with the 1020 is to first tap the screen at your target to achieve focus, then hit the shutter. This will give you many more sharp shots than just hitting the shutter “button” and because the camera is slow anyway, you’re not really going to lose any more time doing it this way.

There is a definite lag between shots, reminds me a lot of the lag time in old digital point and shoot cameras.

Don’t ask. I don’t use it as a phone. I use my iPhone which is definitely more intuitive to me. I was going to say the Nokia “sucks” as a phone, but that might be unfair! Just so you know that I’m not an Apple fanboy and I don’t hate Nokia, fifteen years ago, in the early days of mass consumer cell phones, Nokia was my choice 🙂

The phone has a dual-core 1.5ghz processor, 32gb of mass memory and 4G LTE according to the official specs.

Battery life is not great and it seems to get worse over time. I’ve had the phone for over a year now and I find myself charging it more frequently. I can’t really give you numbers because everyone uses their phone differently. This is not my main phone, I don’t make phone calls or play games with it, I just use it as a camera. With sporadic usage, a charge will last about a day or so just to give you an idea.

At its best, the Nokia 1020 gives an impressive output. At full resolution, images are very crisp and has amazing detail. But that’s “at its best” which means just like the Sony A7R or any high resolution camera, you don’t see the advantage all the time, especially if you’re just taking quick snapshots. 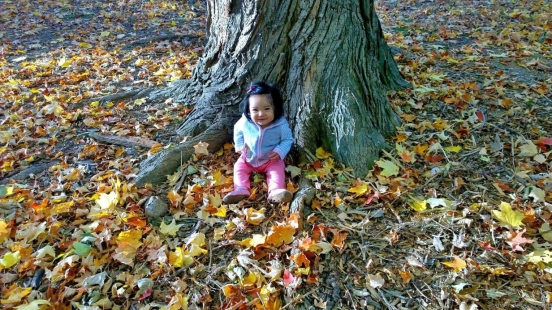 “Baby’s Nest” 2015. Nokia Lumia 1020. This image shows some of the strengths and weaknesses of the Nokia 1020. On one hand it’s colorful and sharp. On the other hand, you can see the clipped and unrecoverable highlights on the sweater showing the camera’s limited dynamic range. I believe the casual viewer would not see anything objectionable with this image. As for the subject, I was walking around when I found a baby chickadee on the foot of a giant tree! 🙂

And unlike the A7R or its siblings, the images do not hold up as well at 100 percent, and I did not expect it to. Apples and oranges. You have to be realistic; I mean this is a cell phone camera with a small high resolution sensor. Not to degrade the 1020, it’s an amazing cell phone camera, but it is still a cell phone camera. The A7R is a true digital camera with a high resolution full-frame sensor. The Nokia costs roughly $180 give or take, the Sony costs $1800 give or take! Be realistic with your expectations and you will love the Nokia 🙂

“Autumn Legs” 2015. Nokia Lumia 1020. The Nokia Lumia is capable of very colorful images. This one was tweaked and may be a little too funky! I am no longer using Photoshop and am still trying to hone my post processing skills on a new program, please forgive me 🙂

Ok, so it doesn’t hold up well against a high end full frame camera. How does it do against a high quality point and shoot like the Ricoh GR (16mp) or Sony RX100? I find that at 100 percent, the images from the two cameras mentioned look better than the Nokia. Tones look smoother, image definition holds up better on the high end point and shoots.

This is a 100 percent crop of the previous image straight out of the 1020. No processing was done to the image. Please click on the image for a better view. Note the softness and almost “painterly” look at 100 percent.

Taken on its own merit, the Nokia makes a fine secondary camera or even as your main point and shoot camera. While the images can be very sharp, dynamic range seems limited which means you need to be careful with exposure and the files are not highly pliable which means they won’t take a lot of messing around with in your post processing. It doesn’t take a lot to turn the files bad fast.

The files, which can be beautiful, appear to have a distinctly ‘digital’ look, perhaps due to the limitations of putting such a high res sensor on a small 2/3″ sensor.

Some of you know that I had a hard drive crash recently that knocked out a lot of my files. I was able to recover most of them and will be adding photos I took with the Lumia 1020 in 2014, so this page will get another update soon.

A lot of the readers of this site also know that I’m a fan of that elusive “film-like” digital file and this is a subjective thing, but I don’t see that with this phone. But hey, there’s nothing wrong with it. It looks digital because it is digital and yes, digital files can be fine too 🙂

Low light shots are surprisingly good. Not 5D Mark III good, but very good for a phone camera. It may sound vague, but any experienced photographer will have an idea of what I’m saying.

“In The Midnight Flower” 2015. Nokia Lumia 1020. An available light sample from the 1020. I tried to extract the exif info for you so we could see what ISO the camera selected, but no exif would show on the programs I used. Please click on the photo for a larger view.

I got this phone over a year ago primarily to use it as a camera. Once I got over the frustration of using it as a camera, I’m able live with its weaknesses because I’m attracted to its strengths, which is a sharp lens and high resolution files.

In many ways, this is the same reason why people are attracted to Sigma cameras. They are slow as a turtle, but the image quality makes up for it. Some can live with that, some can’t.

If the 1020 was my only camera phone, I probably couldn’t live with it, which is why I use the camera on my iPhone 5 more often. However, as a specialty tool for static subjects, the Nokia is fine.

Cell phone photography has come a long, long way. It is the number one method of choice for most of the world’s population today. I don’t remember the numbers, but more people take and share photos with their phone cameras than any other type of camera by a wide margin. You don’t even need a poll to know this. You can see it every day!

To me however, cell phone camera quality still lags behind the best point and shoot cameras, but it is getting there.

It may be too soon to call the Nokia Lumia 1020 a Camera Legend, but if any cell phone camera deserves a spot on the list of legends, the Lumia 1020 should definitely be considered.

The Lumia 1020 is now easily found and the prices very affordable. If looking for one of these, prices are trending at $100-200 on eBay, with $200 on the high end. You may even find them under $100, but these usually have cracked screens and other flaws.

Your best bet for a safe purchase on the 1020 is probably through AMAZON. Especially since today is CYBER MONDAY I would definitely check for deals if I were in the market for this phone!