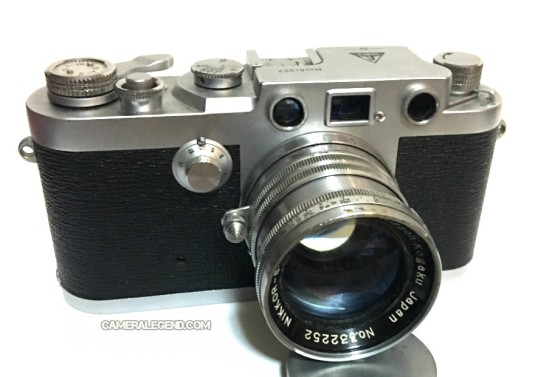 The Nicca 5L is a rangefinder camera made by the Nicca Camera Company of Japan around circa 1957.

Nicca was one of several Japanese companies that brought Leica screwmount clones to the market. The most well known of these clone companies is Canon, but there were also many more companies from Japan and the USSR. Nicca is said to be the predecessor to the Canon company.

The camera pictured above is the Tower 46. It is the same camera as the Nicca 5L, but was sold in the USA by Sears Roebuck under their “Tower” brand.

NOTE: Special thanks to our readers and fellow bloggers at http://www.yashicasalorboy.wordpress.com for pointing out that the Nicca 5L and Type 5 are NOT the same camera! The article has been updated to reflect this. That’s why it’s a “Mystery Camera” to me! Thanks guys! By the way, their blog is awesome for camera fanatics! Check it out!! 🙂

The Nicca 5L like most Leica screwmount cameras has two separate windows, one for framing and one for the rangefinder. The shutter speed range is 1/25 to 1/1000, plus B.

The Nicca’s main claim to fame is the winding lever and the Leica M type back, easier film loading than Leica’s screwmount bodies.

Stephen Gandy has a much more extensive write-up on his Camera Quest website, the online authority on rangefinder cameras. In his article, he says it “outshines Leica’s own renowned IIIg.”

I don’t have any experience with the IIIg, but compared to the IIIf I have, it is indeed better. The film loading, the winding lever, the beautiful, large and clear rangefinder all add up to a more pleasant user camera.

The Nicca 5L is rare, but not ultra rare. Well, the Nicca version itself is quite rare. As I read on Camera Quest it’s “never been seen.” The Tower 46 (the one seen here) is the one you will usually encounter. If you ever see the Nicca version, let me know!

The Nicca is one of those cameras I bought but sold before I could use it. As I already had the IIIf, I preferred to keep the Leica, despite the Nicca being a much better user camera, as I stated above. Sold it when I needed to pay the bills. Of course, I regret it! 🙂

Sometimes, people will try to pull for a lot more on that auction site, but as the Leica IIIg (the apex of screwmount rangefinders) go for around $400-700 at legitimate dealers like KEH, I can only say that the Nicca should not sell for more than that.

The Nicca 5L/Tower 46 is an awesome camera to add to your collection and I’m sure, to use. Someday, I will find another and this time, I’ll keep it!

Note: Sorry for the placement of the “cameralegend.com” logo. I now put it closer to the photos because I had found some of the content of my pages used without authorization. I usually hate copyright logos, but it only takes one bad apple to ruin it for everyone and it only takes seeing your work copied to make you think twice about it.

15 thoughts on “Monday Mystery Camera: The Nicca 5L aka Tower 46”