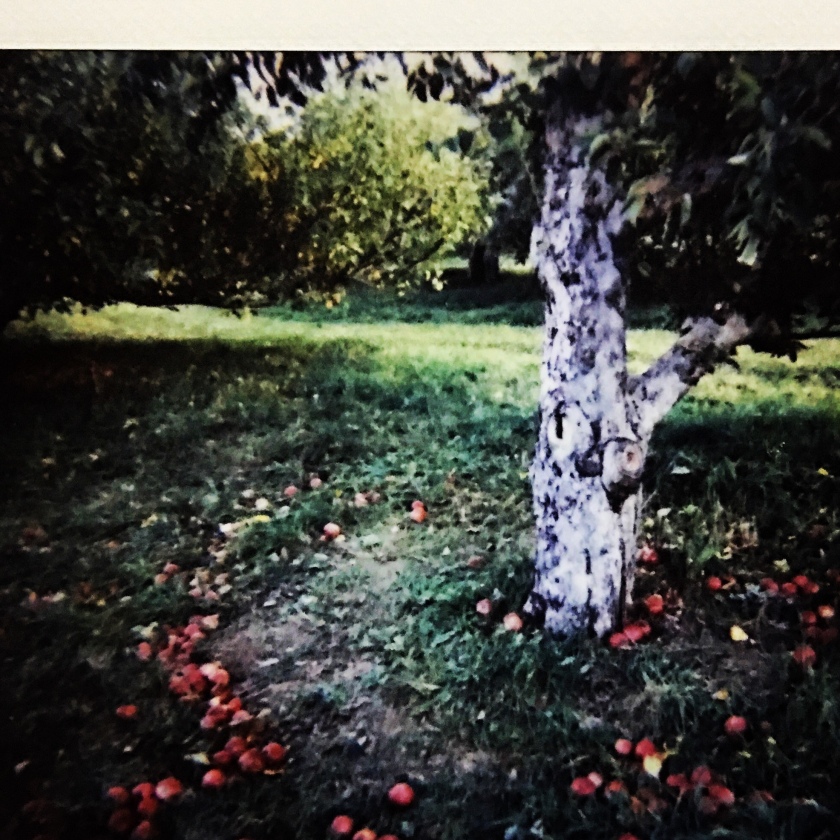 Well it’s that time of the year. You’ve probably seen a bit of this recently but here’s one more.

It’s apple picking time! And if you haven’t picked your apples yet, maybe it’s time to go before the season is over.

They say the apple is a perfect fruit in many ways. Nutrients, fiber, etc. However, I’ve always thought…isn’t this the fruit that God tried to forbid Adam & Eve from eating? If so, is there something God knows about it that us mere mortals don’t? Is there magic in it? Is it a sin today to eat apples? Don’t mind me, just food for thought!

I used a Lomography ‘Instant Wide with the standard 90mm f/8 and Fuji Instax Wide for this shot.

Here’s more food for thought. It may be a “sin” for me to say this, but even though I love instant photography, especially for its organic nature, it has always been a “supplemental” form of photography for me.

The images usually don’t deliver the same technical quality as 35mm, medium format or heck even modern digital. And that’s part of the charm I guess, but does it have to be this way?

And don’t get me started on the cost of Instant film! Back in the day I always heard people say something like “Keep shooting. Film is cheap!”

And my answer always was (and still is)…Film’s cheap but it ain’t THAT cheap! 😀

When you factor in the cost of development, the time required to process the images, the possibility of having to do reshoots…No, it ain’t that cheap!

However, as many of you will agree results from film is usually most satisfying in a way that’s hard to duplicate digitally.

As for that old “Film is cheap” slogan, I know they were mostly referring to standard 35mm or 120 film and not really instant film. As you know, Instant Film is NOT a financially cheap form of photography!

That said, I don’t always find instant prints all that satisfying. Even when sharp, the details are not all that apparent unless you’re using a loupe to look for them. A lot has to do with the cameras and lenses themselves I guess. Many are cheap, plastic cameras with cheap, plastic lenses.

Many instant cameras such as the Lomo I used here rely on guesstimating focus and that’s part of the reason why the lenses are so slow like f/8 it f/12, so that the majority of the time images could be decently sharp. The slow lenses also help keep costs down but also forces you to use flash or a tripod in low lighting conditions.

I’m still waiting for someone to come out with a high quality Instax Wide Camera with a decently fast lens for $500 or under. I’m thinking I’ll probably wait an eternity for that one! 😊

Even worse, I wouldn’t be surprised if Fuji discontinues Instax Wide film before that happens.

Mind you I know about the high quality Instant Cameras of yore such as the Polaroid 600se or the Polaroid 180 that I reviewed here a couple of years ago. As you might know, I loved those Camera Legends but with the end of packfilm they’re just living on borrowed time. What I’d like to see is someone come out with a great Instant Wide Camera with a great lens for the masses.

It may be a hard sell, but I’d bet if someone could make ten of them and sell them for $500 each, they’d all sell out.

I like the concept of Mint’s TL70, the TLR that takes Instax Mini film but I’m just not a big fan of those tiny card sized prints. I want BIG baby, BIG prints!!

Ah well, I’ll just keep dreaming cause I know it’s not going to happen any time soon. I know it won’t! PS: Sometimes I like tempting fate by saying this stuff so I can be proven wrong and get my dream instant camera sooner 🙂

If someone comes out with that killer Instax Wide Camera I’m all for it. I just realized I didn’t say enough about the Lomo used in this article! It’s a decent enough camera at a good price point, I’ll probably review it someday. It’s just not the instant camera I’ve been dreaming of. Ah anyway, sorry for my rambling today I thank you all for reading one man’s random thoughts 😊

Friend, it’s that time of the year again! Time to pick them apples 🍎

The kids enjoyed picking them apples and so did I but I wondered, considering the “fill as you can” bag cost us more than what I could get at the local store, it may be a little fresher but is it really any better? 😊

Not sure but I did enjoy the apples! If you have an apple farm near you, time to go before it’s to late guys! Happy Sunday!