Because it was out of focus, I never posted it and in a moment of brain fog I had a hard time figuring out which camera it was.

I originally thought it was a Yashica GSN or Olympus SP or maybe even a Nikon S series rangefinder, but I quickly figured it wasn’t one of those.

I posted this a couple of months ago on my Instagram account to see if other camera lovers would chime in and help me figure it out.

I think everyone who chimed in made an educated guess and I was impressed with their answers. I came to the conclusion that it was probably a Leica M3 based on a guess of what I was shooting with at the time.

So what is this “Mystery Camera” in the blurry photo? As it turns it really is the Leica M3! The M3 and 50mm f/2 Summicron-M.

As it turns out, I had another frame that I scanned and hadn’t seen in years. I cannot locate the original negative but I’m willing to bet this photo was sequential to the above photo. The hair might look different but sometimes I part my hair out of my eyes 🙂 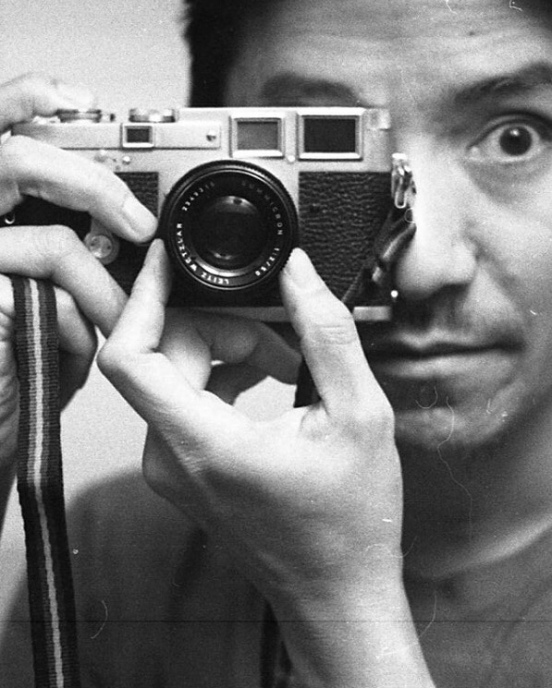 I’m not sure if you can see it here but the “M” can be partially seen above my right middle finger. And the lens says “Leitz Wetzlar” very clearly.

The smaller rangefinder windows in the blurry photo is just an optical effect, an optical illusion.

I always tell people, even though I doubt they believe me, but my camera selfies are not a narcissistic love fest! 🙂

Firstly, I’ve done them for years as a way of checking critical focus. Secondly, as in the case here, they help me remember the camera and lens I used! And the fact that people like looking at photos of cameras? Well, that’s just an added benefit!