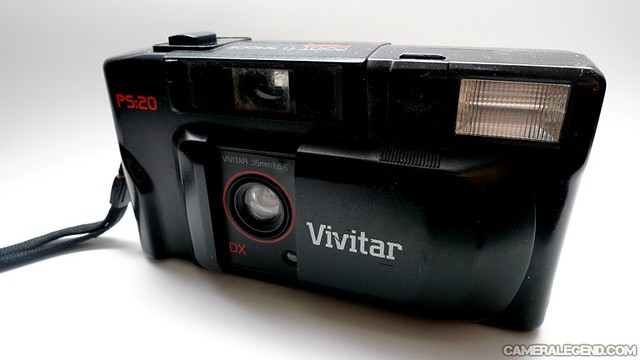 We live in a different age, different time. Everything is better. Cars, television sets, cameras. Heck, even the camera on your phone is likely better than many of the high end cameras you once had. Here’s a camera I wrote about in 2009:

This is my Vivitar PS-20 from 1987. Bought it for $20 bucks at a now defunct chain store called “Caldor”. This camera took me through the late 80’s and half of the 90’s, providing some of the most memorable (if techincally poor) images of my life.

It was part of my two camera kit in my simpler (and poorer) days of the 80s when I had only the Minolta X-700 and one lens, the MD 50mm f/1.7 plus this camera, the Vivitar PS-20. Somehow, I feel like I was much more focused than I am now with the countless cameras I have used. I long for those two camera days, and who knows, maybe that’s going to be a project for me…get rid of everything, use two cameras, and be a happy photographer again 🙂

Ladies and gentlemen, this camera is the quintessential point ‘n shoot. It is what I would call a “SLC” or a “Super Low Class” camera. It is the ULTIMATE “Poor Man’s Camera!” It is poor, it is cheap, it is what people used to think of when they think of a point ‘n shoot camera. In fact, it says “Point ‘N Shoot” on the top of the camera! 🙂

IT’S NOT ABOUT THE CAMERA

While this article is about the Vivitar PS-20, it is really not about the camera itself. It’s a tribute to the lowly point and shoot cameras of yore. To the thousands of lousy, but charming old point and shoots out there. The ones that are worth next to nothing, but have more heart and soul than a $3000 point and shoot.

The Vivitar PS-20 “Point ‘N Shoot” may never be a Camera Legend, but taken as a collective with its thousands of peers, they all could be considered Camera Legends.

SPECIAL NOTE ABOUT THIS CAMERA

This is the funniest thing, except it’s really not funny. A few years ago, some seller on Amazon apparently decided to swipe (steal) this pic from my Flickr stream and use it. You can see the Amazon ad in this link HERE.

I never made a big deal out of it because it’s not an award winning picture or anything and this camera is worth next to nothing. In fact, before I wrote about this camera back in 2009, I don’t believe there was any information on it anywhere on the web because I always do a little research before writing about anything.

As I said, I’m not mad or anything, but I do find it humorous. But if I, by some chance, had an award winning shot and someone used it without my permission, sure I would be pissed.

But this, nah, it’s something I’ve accepted as part of the deal when you post pics on the internet. When you post something to the internet, remember this is part of your “contract.” I’m sure the person who used the photo didn’t know any better.

The main thing people should remember here is, just as Napster once opened the MP3 Pandora’s box, so too do you when you post pictures to the internet.

I’ve always accepted that once you post something, it’s subject to theft or anything by anyone. So please, if you feel you have an award winning picture, DO NOT post full sized images. Put some kind of watermark or something.

If it’s just an average, everyday picture no need to do anything, no one will care. I hate watermarks or copyright logos actually. The only reason I put them here is so that people can remember the website, which is always a wise thing when you’re running a relatively new site.

More cameras to come, have a great week! 🙂