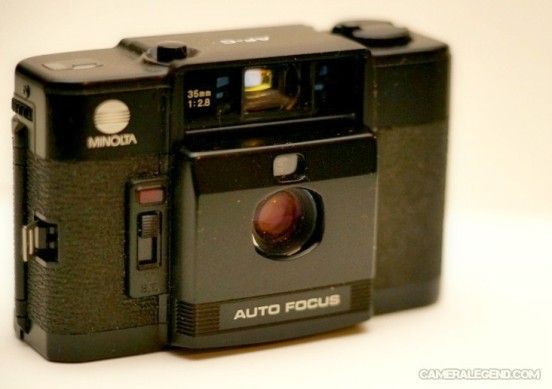 The Minolta AF-C is a compact, autofocus point and shoot 35mm film camera introduced by Minolta in 1983.

The AF-C comes from the late 70s/early 80s era of small, boxy compact cameras such as the Nikon L35AF or Pentax PC35AF, and just like those cameras, it features a fixed 35mm f/2.8 lens.

The camera most closely resembles the Lomo LC-A or Cosina CX-2 and like those cameras, the camera is turned on when you open the sliding cover which protects the lens. Unlike the Lomo or Cosina which rely on scale focusing, the AF-C is an autofocus camera.

As I’ve said in previous articles, today’s advanced point and shoot digital cameras can do almost everything. From 4k video to in-camera editing to wifi sharing. Many of these cameras have astonishing lenses, such as the Leica Q, and price tags to match. However, it seems to me that they’ve lost the soul of what it means (or meant) to be a point and shoot camera.

And what is that you might ask? Well, for me, a point and shoot camera has to be simple. It has to be humble; all you need is a good, decently sharp lens, not a lab chart killer with an astronomical price tag. And lastly, it has to be cheap. By having a good/great little lens and not a lens with some “premier” name on it, they can do that.

And they did all this with the Minolta AF-C. It meets all the criteria I stated: Simple, humble, good/great lens, cheap. The lens on the AF-C is a 35mm f/2.8 Minolta lens and it is a very good, even excellent one. There is no “Rokkor” or “Rokkor G” designation on the lens, so it has no pretenses of being anything more than it is 🙂

The lens is a 6 elements/6 group design and has an aperture range of f/2.8 to f/17 and again, all automatically chosen by the camera.

Don’t let any “premium” designation fool you. It’s not that hard for any decent camera/lens manufacturer to make a great 35mm f/2.8 lens so it’s not necessary that it be expensive. I’ve used the Nikon 35ti and it’s a better looking camera, but I do not think the Minolta lens on the AF-C gives up anything to the 35ti.

The Minolta AF-C relies on active infrared autofocus. There is no way to manual focus this camera, so tinkerers and gadgeteers get that out of your mind.

If you want some control of the camera, it will let you wind/rewind it using a thumbwheel on the rear of the camera. The camera has no autowind/rewind function. Additionally, you can adjust the ISO in 1/3 values.

The Minolta AF-C runs on four SR44 or LR44 button batteries or two CR1/3N batteries. I used the cheaper 675 hearing aid batteries bought at CVS and they worked fine, no exposure problems.

The Minolta AF-C is small and compact, perhaps not as small as many of today’s digital point and shoot cameras, but still pocketable as long as you don’t have the accessory flash attached. 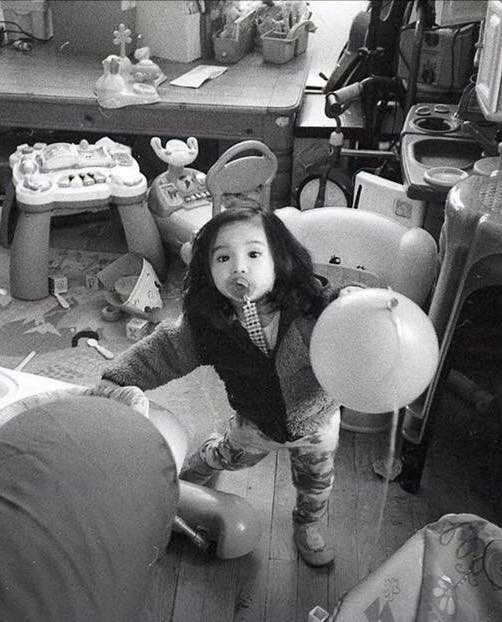 “Princess Of Messy” 2016. Minolta AF-C, Ilford Delta 400, D76 developer. This is a crop from a larger picture. The AF-C displays good sharpness despite the film grain.

The AF-C has two leds in the viewfinder. The green light, which indicates correct focus and the red light, which is a low light warning.

When shooting with the AF-C, the autofocus is so quiet, I wasn’t sure the camera was working properly, whether it was actually focusing at all. But knowledge is power and I have read before acquiring one that this is exactly how the camera focuses and you simply have to learn to trust it. 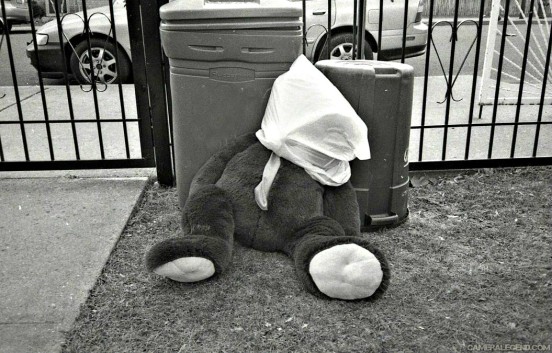 When I developed my first roll, any fears I had were laid to rest. Indeed, the majority of the time, the camera achieved correct focus. The shots that had blurriness were due to movement and the camera correctly choosing slow shutter speeds in low light (something I have a habit of doing to challenge my cameras and myself).

Even better was that nearly every shot on the roll was correctly exposed. Not surprising for me as I’ve always known Minoltas to provide excellent metering. 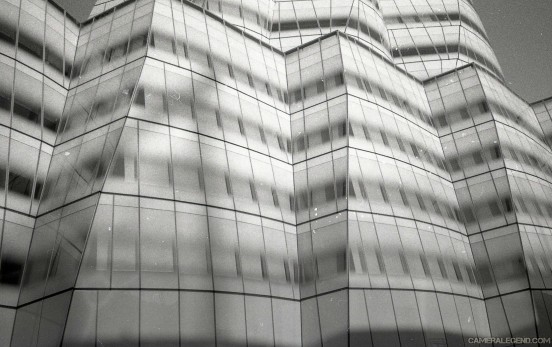 “That Funky Building” 2016. Minolta AF-C, Alford Delta 400, D76 developer. This is the IAC (InterActive Corp building) as seen from NYC’s West Side Highway. This has always been an intrigueing eye sore for me whenever I see it.

The Minolta AF-C is a brilliant example of beauty and simplicity that represents the best of the early 1980s era of compact autofocus cameras. 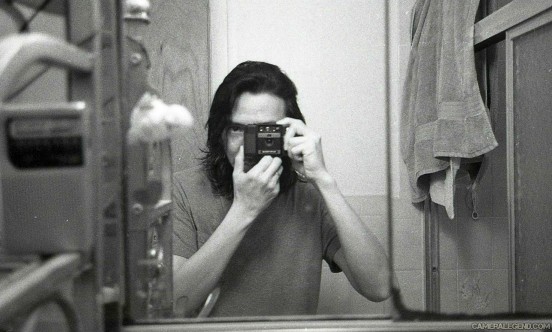 I read somewhere that it was thought of as the ultimate film street camera by some European magazine and I can’t disagree. While some will of course refer to the Ricoh GR-1 (which I love and have reviewed here) as the “Ultimate” I have to say the AF-C betters it in some ways. The AF is much quieter and the manual winding and rewind  makes it even quieter still, both of which are benefits for unobtrusive shooting.

The Minolta AF-C takes you back to a time when “point and shoot” cameras were point and shoot cameras. Give it a little love and faith and this little camera will produce. Today, the AF-C enjoys a cult following among camera lovers, but is largely forgotten by the masses as are many of its peers. But should you come across one, get it because you will have in your hands a point and shoot Camera Legend that will deliver the goods without a lot of fuss or headaches.

If seeking one of these, prices are trending at $20 to $100, with $100 being a bit on the high end. The most abundant place for the Minolta AF-C is obviously eBay.

However, you may also find them in flea markets, garage sales, and Craigslist. If you’re lucky, you may even find one for $5 or maybe free 🙂

Pentax appears to be really upping the ante with their hot pro K-1 and now the K-70. We will keep an eye on this new Pentax, but just from the specs it appears to be an awesome new camera!