In this new series, we will take a look at cameras that somehow didn’t make the cut, but beyond just that, they had something about them or their design that made them less than pleasurable to use.

What separates this from “The Best Camera I Never Knew” series? I don’t know, it’s a thin line between love and hate as the song says! 🙂

As a camera, the N70 is an autofocus film camera which offers a shutter speed range of 30 seconds to 1/4000 plus bulb. The camera has a built in drive capable of 3.7 fps in high speed mode. It has matrix, center-weighted, and spot metering.

The camera is powered by two CR123A batteries.

MY RECOLLECTION OF THE N70

I got one of these in 1995 and I remember being smitten by this new toy. It came at a time when my interest in photography had been renewed after using my Minolta X-700 for ten years previously.

The N70 looked and felt nice and feels good in the hand. But that’s where it all ends, ergonomically.

The N70’s claim to fame was its unique “fan” wheel of sorts. It is actually a control panel that has become known as the FAN. But this is also its achilles heel. Now before any N70 fans (yes, there are some) out there start bashing me, I will say that once you do get the hang of the FAN it works pretty well and some like it. 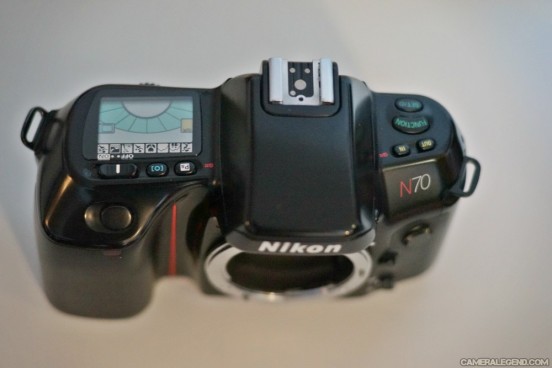 The Nikon N70 is distinguished or perhaps cursed by its very unique, very funky electronic FAN control panel. Once you can figure it out, it will “allow” you to take good pictures 🙂

I remember being very happy with the results. The camera provided speedy AF and seemed to deliver perfect or near perfect exposures.

So why do I appear to be bashing it now? It all comes down to, once again, that FAN my friends!

Ok, yes, in 1994 I was twenty-two years younger and enjoyed fiddling around with electronic gadgetry trying to figure out how to work this camera. In 2016, I am twenty-two years older and have very little patience to try and figure this camera out again. Ok, that’s not the camera’s fault 🙂

And more so today, when you can get a camera like the Nikon N90s from the same era or even the older N8008s for the same price, anyone actually wanting to use the N70 I think has too much time on their hands!

I could try to break down how to use this “fan” shaped thingy, but that would take way too much time and I’d have to write a whole book on it!

I think the Nikon N70 came at a time when Nikon was facing some very strong competition from Canon’s all electronic EOS series and they allowed its designers some very liberal creative freedoms.

As I said a few times before (as in my Rollei A110 and Rollei Rolleimatic reviews), being creative is a good thing, but being too creative might not be such a good thing. And this time, I can’t even blame it on Heinz Waaske!

Nikon is known for cameras with great ergonomics that are easy to use and quick to figure out. This is one of the reasons pros love Nikons. The N70 is radically different from any Nikon economically. Its design was never seen before or since, which makes me think that even Nikon knew it was too funky!

I’ve said many times, one of my prerequisites for a good camera is a camera that you can figure out how to use without an instruction manual. Maybe not for everything, but for at least 80 to 90 percent of its functions. You will need a manual if you want to figure out all  the Nikon N70/F70 can do. That says everything!

The Nikon N70 is a camera that actually will allow its users, indeed reward its users with the ability to take a picture once you can figure it out. For that “FAN” design alone, I would call it a Camera Legend, but maybe not in a good way 🙂

It is one of my contenders for the “Worst Camera Of All Time” and indeed, it might be the worst designed Nikon ever, but being that I have a soft spot for Nikons, I don’t think it’s the worst camera I’ve ever used.

If you like funky cameras, you can’t do much better than a Nikon N70. Buy one if only for that FAN! 🙂

If seeking one of these to use, and again I’m repeating to use, I’m not sure that’s a good idea, but prices are very good! They go anywhere from “free” to $50.

I recently picked up one for nostalgia’s sake for $3 dollars. I don’t intend to use it. I just marvel at the FAN 🙂

If you want one to use, you may find a good selection HERE.

There are some great deals going on now on CANON gear. Interesting to me is the hot new Canon EF-M 28mm f/3.5 macro for the EOS-M series with built in ring-light! This is one lens that I’m interested in getting for myself. Check it out in the links for great deals and prices.

I would like to apologize to my fellow bloggers and readers of this site. I know I come on sporadically and I know it’s slowed down quite a bit.

The truth of the matter is that I never meant this to be a daily blog. I wanted this to be a long term project, which is what it is. When writing about Camera Legends like the Polaroid 180 or the Canon T90 or the Nikon F5, for example, I realize this information will be out on the internet for a long time and with that in mind, I try to take care on what I write and what I say.

As the body of articles build up, these pages become more like a book on cameras, which is closer to my original goal.

I do want to thank the small, but loyal folks and friends who read this blog. I do this blog for me, and I do it for you too. Thanks 🙂

4 thoughts on “The Worst Cameras Of All Time Part I: The Nikon N70”