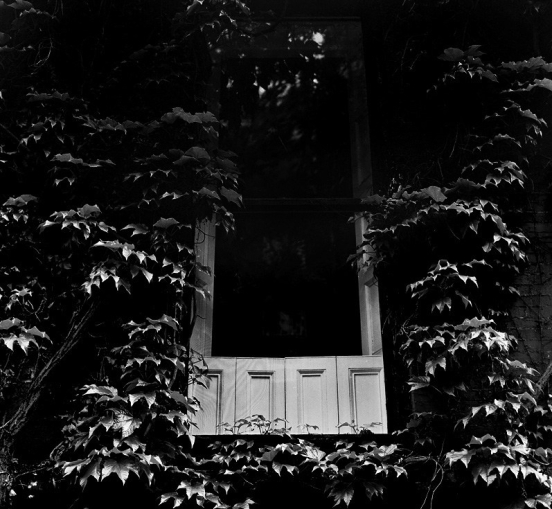 About eight years ago I was down in Greenwich Village and just happened to walk by this amazing home that seemed almost completely covered in leaves. It caught my eye and it’s hard to miss. I grabbed my trusty Rolleiflex 2.8C and took a photo of it.

At that time I was posting to photo forums and I titled it “House On Mockingbird Lane” as a tribute to the spooky Munsters television show. That’s the first thing that came to mind since the eery house seemed to be in the process of being “eaten” by the growing leaves. I’m a big fan of these homes covered in leaves and this was one of the best I’ve ever seen.

It was many years later that I discovered the house actually belonged to the famous photographer Annie Leibovitz who was still the owner at that time! She has since sold the place, which I think consisted of three buildings and was called a “compound” by the local papers. As you may or may not know, Annie has photographed Kings and Queens, pro athletes and presidents. She has done it all in photography.

If you want to look at more pictures of the place, search for “755 Greenwich Street.” Quite awesome to see that place in person and then to learn that it belonged to a world famous photographer. That’s why I say…always carry a camera! 🙂

4 thoughts on “Photo Of The Day: “House On Greenwich Street””