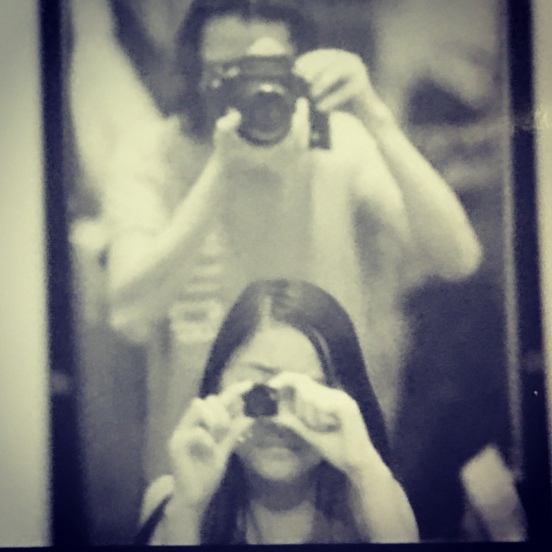 From 2015, your Brother here with a Pentax 6×7 and my eldest Zoe with her CVS camera…we start ’em young in this family! 😊😘

My elder daughter today enjoys shooting with her iPhone but for some reason both my girls have grown to hate me taking their photos. Actually “hate” might be too strong of a word.

What they really don’t like is if I take too long playing around with the camera settings or focusing etc, which is to be expected when shooting with older manual focus gear, ie, rangefinders, TLRs, medium format, large format etc.

And when they complain my response is usually something like…you gotta have patience!!

And if I want to make a stronger point, I might say…you’re a photographer’s kid and you can’t sit still for a photo?! 😀

How about you folks with kids or even significant others like wives, girlfriends, boyfriends? Are they into photography? Are they willing to sit or stand still as you test your new gear on them? I’d love to know how you deal with it!

Happy Friday and have a great weekend folks! 😎🙏🏻👍🏻

“Two For Two” 2016. Playing around with the Fuji Insax Mini 90 Neo Classic while trying to give Baby Zay her milk. Cameras and kids can be fun until they start hating it! 🙂

Just sharing with you guys a couple of postings I made to the YouTube channel but did not post them here till now.

These are segments I called “Tuesday Trends” where I look at topics that I feel are “trending” in the camera and photography world and even though they might not be mainstream news, I feel are interesting enough to put a spotlight on.

First up is the legendary Canon AE-1 from 1976, one of the most popular cameras of all time.

Just for you guys, I’ve cut to the chase in the above video. I came to the conclusion that the Canon AE-1 prices have been rising is because…YOU GUYS ARE BUYING THEM UP! 🙂

Not you my camera savvy readers, most of you guys probably have or have had the AE-1 at some point in your lives, but hipsters (you know who you are!), newbies, and anyone just getting into film photography. Part of the problem is because the AE-1 was, and is still so very popular, it almost always shows up during a search for film cameras.

Now first off, let me say I love the AE-1 for what it is. It’s a great camera that introduced millions of people to the wonderful world of photography. Yet, especially today, its specs are hardly earth shattering. Keep in mind, I’m just talking about the AE-1 original, not the latter AE-1 Program though when it comes to rising prices we can count that camera in too.

Shutter priority, manual mode, and relies on batteries. If you’ve read my pages here, you could probably read between the lines. Especially that last part about the batteries.

Now I’ve never been an anti-battery camera person. On the contrary, I have always found most modern cameras that uses batteries to be reliable enough not to worry,

That said, if you have a choice, especially the choices we have in today’s used market then I would say I would much rather buy a purely manual camera that doesn’t need batteries to operate, other than the meter of course.

I was quite disturbed to find the AE-1’s prices rising, after not checking for a long time. I used to periodically buy this camera to give away to friends or kids who wanted to learn photography. They never cost any more than $25-50 for a whole package of body, lens, filters, etc. Not any more. Now prices for a body alone averages $70.

Second up is the Fuji FP-100C, the packfilm classic that Fujifilm discontinued in 2016.

I posted somewhere on social media a couple of weeks back that I was facing REALITY and giving up on packfilm. In fact, I already have a buyer for my Polaroid Land Cameras once I deplete my last few packs of FP-100C.

Even the honorable fellows at CATLABS of JP who declared two years ago: “WE WILL MAKE PACKFILM” have given up on the process as announced this week.

As I had made my decision and prepared this video before their announcement I thought it was very timely! That’s what I mean by trends!

Basically, to cut to the chase, and if you DON’T want or have time to watch the video, I’m stating that if you ever wanted to try this film this might be the time because after a period of relative stability last year, the prices for the FP-100C are rising back up which may or may not indicate that the remaining stocks are close to depletion.

A sign that it is nearly gone is that B&H and Adorama no longer show this film in stock. Even a couple of months ago, it was.

Anyway, I hope this is helpful to somebody out there. Oh please forgive me when I get into “character” lol. As I said, you kinda need “personality” when you’re doing this YouTube thing 🙂

Catch you guys next time!

Just a couple of random items for your Flashback Friday…,

It felt like yesterday when I shot Baby Zayda cheerfully eating her Cheerios. I also used this image in my Fuji Instax Mini 90 Neo Classic review. As I said in that article, I was not fond of the wallet sized photos but this shot is my favorite from it. Upon close inspection, Instax Mini files are sharp!

Anyway, the photo got me thinking about today’s subject…

Ah friends, is it springtime already? As the years go by and as you grow older, do you ever say to yourself…there are just so many springs left in your life?

As a kid and young adult, life seemed timeless and full of possibilities. As a middle aged man, the realities to what may lie ahead seem more real and though not yet urgent, the feeling is there that I have to do what I need to do and do it soon…whatever it is I need to do! I really am not sure what that is! 😊

Someone once said I was a nostalgic fool and indeed I am! But if memories are all we have, then what is a person to do but look back?

The beauty of looking through the eyes of a child is that you kind of relive at least some of your youth through their experiences.

I don’t know friends, I just see life flashing before my eyes. Kids growing up. Years going by faster and faster. Is it just me?

As a complement to our 2016 review of the CONTAX AX, the camera from 1996 that tried the titanic attempt to “autofocus” manual focus lenses, I have added a short YouTube video review of the camera.

You may remember the article as part of the “Tuesday Titans” series. On the video, I have changed it to the “Camera Legend TITAN” series so as not to be tied down to a Tuesday timeframe 🙂

The video does include additional features such as tips on using the AF, and a video view of the ingenious autofocus drive mechanism. Hopefully it helps anyone who is looking at buying one of these cameras.

I plan to do more of these YouTube videos for other cameras already reviewed on our blog, if and when I can and then embed them directly into those specific articles.

Speaking of YouTube, I can tell you this will be an uphill climb. So many photography related channels! But I’m not so much concerned about the views or number of subscribers at this early stage because just like this blog, I am looking at it as a long term project.

Just like the articles here, I figure whoever will be interested in the cameras we have profiled will eventually stumble upon the video, as they have with the article since YouTube is apparently the second largest search engine.

Staying for the long haul is not a problem for me. I have dedicated myself to do this. Creating the videos, the editing, the time taken, even for my low budget videos? Now that is a little troublesome!

Anyway, this written blog will always be my base and so I thank you all so much for your support over the past few years. I wouldn’t be doing all this if there wasn’t anyone to write for! THANK YOU! 🙂